Our Demands and Analysis 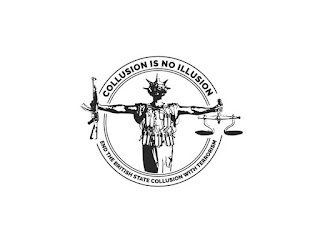 COLLUSION IS NO ILLUSION
End British state collusion with terrorism

a) Analysis
b) Demands

1. Britain is the leading state in the world that colludes with terrorism.
The British state has for many centuries been allied to the most sectarian and violent forces in the Muslim world. For example, the British were fundamental in the creation of Saudi Arabia and maintains its existence.

2. The British state continues to utilise violent sectarian forces, most evidently and openly in their promotion and facilitation of scores of people to conduct terrorist operations in Libya from Febuary 2011, while Nato bombed from the skies for seven months. Britain is still steeped deep in collusion in Libya today.

3. British collusion with terrorism was also evident and remains evident in the war in Syria, whereby under the watch of the British authorities around a thousand people have left Britain to join Daesh in Syria, and many of those have returned to Britain.

1. The British state must end its support overt and covert to all terrorist organisations.

2. We demand that the British media and government policies stop a campaign of discrimination of the Muslim community as it does nothing to stop violent sectarianism and terrorism, but is a cover for them to promote racism against Muslims and to cover state collusion.

3. We call on the British people to get involved and support out work by reading and sharing our information and research, and being involved in our work directly. It is the public at large who need to drive this campaign.

4. We will campaign to take the British government to the European Court of Human Rights on the issue of collusion.

5. We will campaign for the United Nations to conduct a thorough investigation into this collusion.